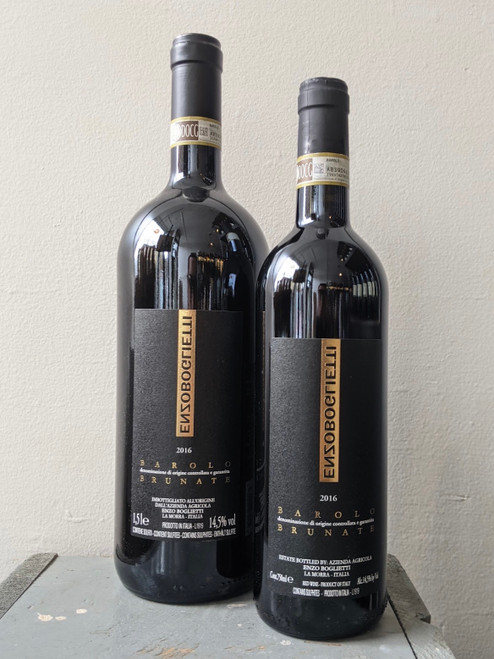 Originally a polyculture farm, in 1991 brothers Enzo and Gianni Boglietti began to phase out the other farming operations and establish their winery with their father’s 2.5 hectares of vines in La Morra; the family’s holdings have since grown to include just over 22 hectares. The estate is certified organic as of the 2017 vintage. The brothers are focused on farming with low yields, achieved through green harvest and bunch thinning. Some of their vineyards boast very old vines, up to 100 years old. In the cellar, fermentations are spontaneous and temperature-controlled. Over the years, the house style has gotten less extractive, and the use of wood is tending to be larger and more neutral. As of the 2014 vintage, the Barolos are now mostly fermented in large wood open-top fermenters called tine with gentle macerations cappello sommerso lasting up to a staggering 90 days; the wines are aged almost exclusively in large French oak botti of 2500L and larger.
Brunate is one of the most famous crus of La Morra if not the whole Barolo zone. Its red-fruited profile, textural richness, and capacity for aging put it in the upper echelon. Enzo owns 0.52ha here, S/SE facing between 300-350m. Fermentation in open-top tine, 80 days of maceration. Aging is in French oak cask. 2,300 bottles made.